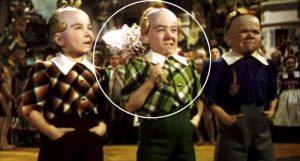 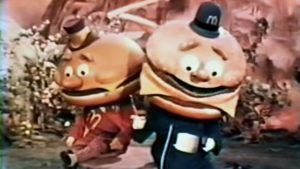 Billy Curtis and Jerry Maren in McDonaldland. Both of them were in the Lollipop Guild from the original Wizard of Oz.

From 1971 on, for roughly a decade, my dad Howard Morris directed the vast majority of the original and now classic McDonaldland commercials. He helped cast some amazing actors to play the various crazy characters. Yes, it was just about selling product for a big company. But introduce the level of talent the ad agency so wisely brought in to produce these, the commercials were feature-style, extremely expensive filmmaking in every way. Each commercial was designed as a mini short-film in that they had a beginning, middle, and end. The crew was basically the same people for almost a decade. We were close. I was on set more or less from day one, and watched the creation of most of those commercials, from casting, to shooting, to dailies, to editing and finishing. Good old fashioned non-digital handmade filmmaking. In those days the ad agencies were great. They were friends of ours, too. They actually understood the creative process back then, and allowed their directors to work without creative intrusion. Trust me, as a director myself, those days are long gone.

In that world of real filmmaking and brilliant talent was a wonderful human being named Jerry Maren. Well known for playing one of the Lollipop Guild munchkins in The Wizard of Oz, Jerry Maren, who once handed Judy Garland a lollipop, died today in San Diego, CA at the amazing age of 98.

Jerry loved to act. In the early 1970s he was hired to play the role of Officer Big Mac. Everyone knew when he arrived where McDonaldland existed, Stage 5, located on a studio lot across from Paramount Studios on Melrose. I remember each morning Jerry would show up for work, he was always happy. I was just six at the time but everyday I would hang out with him as he dressed up in costume. He would suddenly start to sing. Not just singing quietly to himself, but singing to me! And he would use my name in the song! I’m pretty sure these were little made up on-the-spot strings of melodies that were floating in his head. They were just wonderful. Every line told a story about me, it rhymed just right, and he was always in perfect pitch. Very creative.

For Officer Big Mac, Jerry had to wear a huge hamburger head. It was very heavy and had to be secured to his body using a special steel framed upper body and shoulder harness that the head would then be slowly lowered onto by three or four members of the crew. Jerry could only stand up for a limited amount of time, supporting that amount of dead weight, before he had to rest. The head even had special hydraulics inside to control movement of the mouth by an off-screen crew member. And of course he then had to act, and make the character come to life according to the script, all of which under very hot lighting. plus Howard Morris giving intense verbal direction as it all came to life. It was a lot of pressure on Jerry, but was amazing as to how well he handled it. He was a true pro. If produced today, they would do all of this against blue screen with digital animation for the head, all in cushy and comfy air conditioned environments.

Jerry, you were a tremendous part of my childhood, and I can still hear your sing.