Here’s a recent interview I did on Ernest T. Bass for the great Allan Newsome.

Early this morning I was reflecting on family holiday dinners of decades ago. We would gather at our home in the suburbs of Los Angeles. I was young, a teen something back then. It was mainly family, but also friends of my fathers from the industry would join in. One Thanksgiving, one of my cousins was dating a young man, 20 something I think. We’d never met before. He was extremely soft-spoken and humble. Had cowboy boots, and a nice twang in his voice. Turned out he had recently moved to Los Angeles from Kentucky. He said it was a huge change. Mentioned he was a big fan of The Andy Griffith Show. Imagine being in his shoes, suddenly among millions of people in Los Angeles, and now having dinner with Ernest T. Bass. We were all sitting around a big round wooden antique table, complete with a Lazy Susan in the middle. As the night rolled on, I think this shy Kentucky local finally felt comfortable enough to ask my pop questions. Questions similar to what most folks would ask Ernest T, such as “How did you come up with that crazy character?” and “What was it like being on the show with Andy and Don?” My pop always had great things to say about being on the show, and how he made things work. As we were eating, this fellow tells us he was a singer and songwriter. He played at various small clubs around town. He found out I played the drums and we talked about that a little. I think he said he had a bunch of songs and was looking for a record deal. Turned out he got exactly that within a few years after that dinner. Oh, did I mention his name? Dwight Yoakam.

I hope you all had a truly Great Thanksgiving! 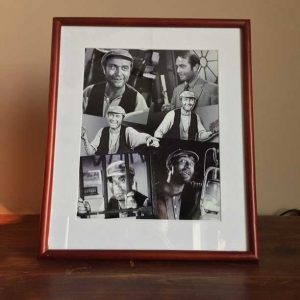 Real Howard Morris signed rocks! Get them while they last… 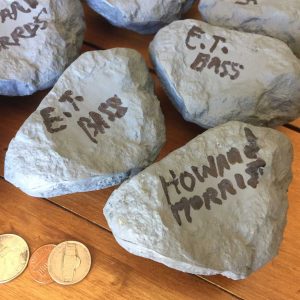 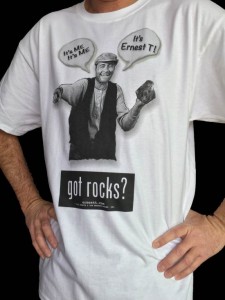 SHOW THE WORLD WHO YOU REALLY VOTED FOR!

We have a limited number of Ernest T. Bass for president bumper stickers! 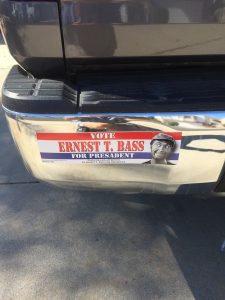 We still have a handful of limited edition Ernest T. Bass for President T-shirts! Nobody else has this stuff but us! 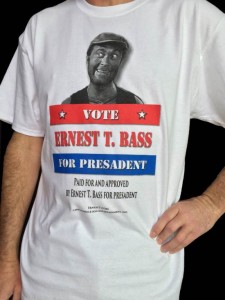 SPECIAL! Buy any 2 or more T-shirts and get a BASS FOR PRESIDENT bumper sticker, FREE!

Special $7.99 flat fee RUSHED SHIPPING for ALL items in your cart! Everything’s on sale!!

Your purchase helps to keep this site alive.

Hey you! Yeah YOU! Election day is on the way!!

Get your limited edition Ernest T. Bass for President T-shirts! Nobody else has ’em but us!

I woke up looking at the clock when it hit me, again. My pop died eleven years ago today, almost to the minute as I make this post. So many memories. We were like brothers. No words can describe how much I miss him. We’ll always love you. 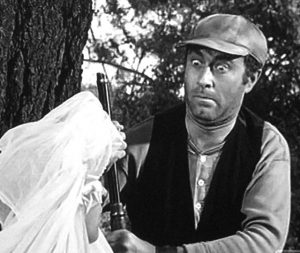 It’s Thursday March 3, 2016. I just wanted to let all y’all’s know that we’re working vigorously behind the scenes on a new store. New T-shirt designs are in the oven and I think you’re gonna love ’em. I can’t say much more than that, other than if you’re as confused, perplexed, and dare I say flat out entertained by all of the political wrangling by the candidates for the next US president, then you absolutely wanna keep an eye on this page over the next couple of weeks for a bigger-than-Trump type of announcement.