The one and only store for Howard Morris authorized collectibles.

Get a free “Bass for President” bumper sticker with any purchase!

NOVEMBER 7, 2017: I’d like to mention the loss of the great Jerry Lewis that occurred in August of this year. He died of cardiovascular disease at 91. He was yet another amazing talent on a growing list of folks who are greatly missed.

Over the years, Jerry not only blazed new trails of comedy, he also had long-standing involvement with my pop, Howard. The great Jerry Lewis was a fan, and Howard was also a Jerry fan.

Jerry did so many amazing things well, both on and off screen. He did so alongside so many amazingly gifted people. He appeared on everything from radio, stage, and network television shows such as “The Martin and Lewis Show” with the great Dean Martin. He appeared on “The Ed Sullivan Show.” The list of career achievements is staggering, including numerous comedies as an actor, writer, producer and director.

One of the films Jerry made that I am a fan of, is the original 1963 version of “The Nutty Professor.” His ability as a comedic actor to swap out diametrically opposed roles in such a seamless manner, in one film, and direct that film, was and still is fascinating for me.

In 1966, Jerry also starred in a film with Dennis Weaver, and our friend Brian Keith, called “Way… Way Out.” Both of these films also had another great actor in them, the amazing Howard Morris. Howard had wonderful roles in each of these very funny films. The images below are two stills from “The Nutty Professor.” One is a reaction shot with Jerry in-character as Professor Julius Kelp. The second is a reverse shot (in the same scene) of Howard playing Elmer Kelp (Jerry’s father). 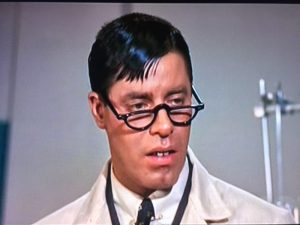 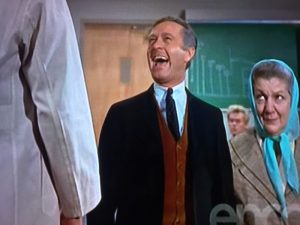 JUNE 2, 2017: True or False; The intense discipline of dramatic theater, combined with Shakespeare, paved the way for Ernest T. Bass to run wild in Mayberry.

Answer: True! Long before The Andy Griffith Show, while serving as a sergeant in WWII (and subsequently on Broadway) Howard Morris performed the character of Laertes in Hamlet. SPOILER ALERT – NEXT SENTENCE ONLY: Laertes ends up killing Hamlet. But, as with all Shakespeare plays, there’s a brilliant twist!

My friend Allan Newsome shares some interesting facts, and Shakespearian ties, in this episode of Two Chairs No Waiting. Please support Allan in his tireless efforts of providing consistently amazing Mayberry background info by subscribing to his “Two Chairs No Waiting” either on YouTube, or his podcast.

It was 12 years ago today, almost to the minute, when we lost Howard.

I think about him multiple times a day.

I will always love him. 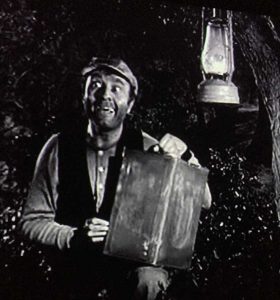 May 2017: We still have a number of real Howard Morris hand signed rocks. 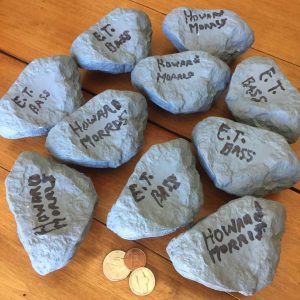 Our friend, Don Rickles, passed away yesterday, April 6, 2017. This was a hard hit for me because I knew Don pretty well. I was driving on a steep canyon road, way up in the hills above southern California when I received news of Don’s passing. A flood of memories came rushing in. I had to pull over to process the impact of what he meant, not only to me, but to the world. Don and my father knew one another from various show biz events over the years. I was very young, maybe six or seven when I first met Don at an awards show in the early seventies. Many years passed, and ironically, in 1993 I ended up working for Don on a TV sitcom called Daddy Dearest. The show aired for one season on Fox. It starred Don Rickles along with Richard Lewis. I was a production assistant on that show. I lived in Malibu in those days, and Don had a second home there, a beach house in The Colony. I was asked by the folks running the show, on occasion, if I could pick Don up on my way to work, and drop him off at the set. I was a huge fan of Mr. Rickles, and I couldn’t believe that I was asked, well, really, I was being entrusted to drive him. Don was great. He was the exact opposite of what you think you know about Don Rickles. Really, he was a very nice, very quiet private person. Smart, quick on his feet, but extremely down to earth. He knew my father was Howie. He expressed a great admiration for my pops work. When I arrived at his house in Malibu, he was always ready to leave at that exact moment. That’s the way my father was, and the way of true professional stage actors. The good ones know exactly when they need to hit their stage marks. In fact, all appointment times in their lives become their stage marks! Of course, Don was no exception to that rule. The drive to the studio took roughly an hour, which meant that we had quite a bit of time to pass. Malibu traffic on Pacific Coast Highway was a bear sometimes, let alone using side streets to negotiate around the jams. One thing you do not do when in the company of a legend, is attempt to get them to talk. Especially a known super guided insult-missile like Don. You better just just let it be. If they want to chat, great. If not, that’s great, too. There were brief quiet moments, but Don would open up and fill them. It was probably a good distraction from his having to learn lines. We talked about many things, including his family. He was very proud of and greatly loved his son Larry and daughter Mindy. Larry, was also a friend of mine from that show. One day before our first meeting, I was working on the stage. Somebody from production came to me to tell me that Don’s son, a guy named Larry, was going to work as a set PA along with myself and the other PAs. He had never worked on a show before and we were to show him the ropes. Almost instantly, Larry and I became friends. Larry was very special. He was very funny, had a wonderful laugh. At one point, he arranged, with his dad, tickets for us to see Don perform at his show at the Desert Inn in Vegas. Myself and a few other production friends from the show flew out from Burbank. I think we stayed two nights. Don was brilliant. He pointed us out during his show and insulted us. We had an absolutely terrific time. Soon after our return from Vegas, Daddy Dearest got the axe from Fox. It was cancelled after just one season. It was a let down, like a family breaking apart. Life for each of us moved on. I started a small production company that was located just a few doors down from where Larry bought his first condo, near Westwood. I would sometimes visit him in Malibu, or at his folks house in Beverly Hills. His sister, Mindy, was also hanging around. She was great. I stayed in touch with Larry for a few years. Eventually, things changed and we lost touch. The reason I am also reflecting on Larry is because both Larry and his father are no longer with us. Larry passed away in 2011 at the age of 41. I’m sure Don, his wife Barbara and sister Mindy, suffered tremendously by the loss of Larry. To wrap up a long post, I was fortunate to get to know some of the Rickles family. I was also fortunate, as others have expressed, regarding Don and his pin-pointed laser-focused insults. In 1993, while on the set of Daddy Dearest, this lowly production assistant, me, suddenly found myself pray to a public Don Rickles insult. It was harsh, everyone laughed, but I won’t get in to the details here. However, it was very funny and I loved it. Don, I’ll hang on to that moment forever.

Here’s a recent interview I did on Ernest T. Bass for the great Allan Newsome.